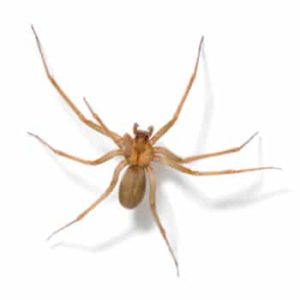 Brown Recluse spiders are approximately 1inch, including the legs, and yellowish to light tan to dark brown in color.  Not a particularly hairy spider, a brown violin marking on the back may be faded or absent.  One of the best identification tools is the placement of 3 pairs of eyes in a semicircle pattern on the head.

Brown Recluse spiders range from Alabama and Tennessee west to southern Texas and north to Nebraska.  Within this range they may be found outdoors living in debris piles, under logs, stones, bark and in utility boxes and vehicles.  Brown Recluse spiders have adapted to living indoors in dark storage areas including closets, attics, basements and crawl spaces.  Preferring stacked items and clutter, they may be found in boxes, papers, furniture and clothing.

Brown Recluse spiders are active night hunters and eat insects including earwigs, silverfish, crickets and cockroaches among others.

Brown Recluse spiders spin an irregular off white web which may be found in drawers, corners, shelves, behind or under furniture and other undisturbed areas.

Male Brown Recluse spiders wander farther in search of food at night and more commonly crawl into shoes, clothing and bedding than females do.  Incidents of humans being bitten are usually in self defense when the spider becomes trapped against a persons skin while in it’s hiding place.  A female Brown Recluse spider usually lives 1 to 2 years and will produce 1 to 5 egg sacs during that time.  Mating occurs from February to October with optimal egg production occurring in May through August.