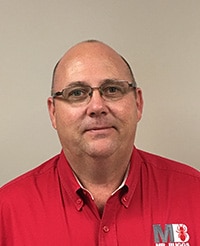 For those of you that know Harry Slagle, this will come as no shock to you…but Harry has been promoted to Supervisor at our Pelham location! Harry has been with Mr. Bugg’s Pest Patrol since April of 2000, and in that time, he has proven himself to be an invaluable asset.  For 16 and half years, Harry ran one of our most successful pest control routes in the Shelby County and Jefferson County areas, and he did so with a smile each and every day.  This is just one of the MANY reasons that Harry was the perfect choice when it came time to promote someone to the position of Supervisor.

Harry’s witty personality and infectious laugh along with his genuine concern for each of his customers are just some of the traits that made him so successful as a technician, and which will no doubt make him successful as a supervisor.  When someone hires our company to provide pest control AT their home, they are also inviting one of our technicians INTO their home.  We understand the importance of that, and it is not something that we take lightly.  Since joining our company, Harry has always treated his customers as he would a member of his own family…with courtesy and respect.  There is no doubt that as Supervisor, he will do the same with his fellow employees.

Harry has always approached each day with a positive attitude, and he is one of those rare guys that is always willing to do “whatever, whenever, and wherever.” He has earned the respect of those around him, and therefore he is the natural fit to take on this new role.  We are so happy for Harry, and we are extremely excited to see how our company can grow under his leadership!! Congratulations Harry! We know you will be great, and we look forward to this next chapter in your career!