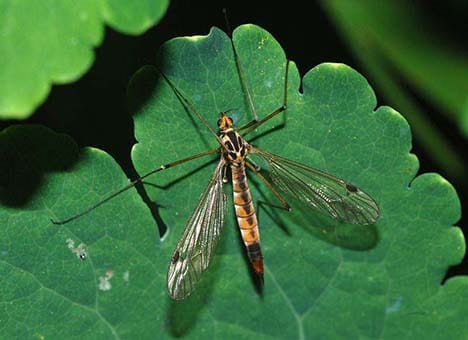 Most people can relate to this…you open your front or back door and in comes a giant, flying creature of some sort that manages to get past you and the next thing you know it’s “bouncing” off the ceiling.  Many home owners have been experiencing lately an invasion of what appears to be giant mosquitoes. Even though these insects resemble mosquitoes, they are actually Crane Flies, aka “mosquito hawks”. And although the nickname “mosquito hawk” sounds like they could be beneficial and scary all at the same time, they are neither a predator of mosquitoes nor are they harmful.

Fortunately, unlike mosquitoes, Crane Flies do not bite, and some lack mouth parts altogether. In fact, most Crane Flies do not even eat anything as adults because they typically only live for a couple of days.  Their adulthood generally consists of a fast mating season before they die. They are similar to mosquitoes however, in that they require an aquatic or damp area to lay eggs and for larval development.

Crane Flies tend to congregate around porches and patios because they are attracted to light. Fortunately, they generally only have one generation per year, making them more of a nuisance during their short life span rather than a chronic pest. They tend to be more of a problem in the early Spring or in the late Fall.  In most cases, waiting until the population dies off (generally a few weeks) is the best method of “removal.”

Because they require water or a damp environment for their life cycle, just as mosquitoes do, if you are experiencing a problem with them, you may be a prime candidate for a mosquito invasion as well.

Contact our office today to schedule a FREE evaluation for your Mosquito Reduction needs and start enjoying time in your yard.