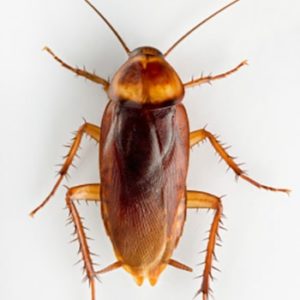 American cockroaches are the largest of common roaches with adults reaching 2 and 1/8 inches.  Adults are reddish-brown with pale brown or yellow markings on the thorax (section behind the head.)  Males and females both have wings though typically fly only if temperatures are above 85 degrees.   The females have a broader abdomen than the males which have longer wings.  The nymph (baby) cockroaches are initially grayish brown but become more reddish-brown after several molts.

The American cockroach is abundant in sewers, trees, shrubs, woodpiles, and yards.  They prefer moist shady areas with ground cover, mulch, irrigation systems, and other landscape features frequently provide.   When exterior conditions are unfavorable, American cockroaches may move indoors and are usually found in basements, kitchens, laundry rooms, or bathrooms.

Although they feed on a variety of food, including small insects, fungi, and algae, American cockroaches prefer decaying organic matter such as leaves and wood particles.

Along with sightings of the roach itself, other signs include droppings or egg capsules.  American cockroach droppings are small, blunt on both ends, and have ridges on the sides.  Egg capsules are 3/8 inch, reddish to blackish brown, and dropped or glued in warm protected areas near food.

Call for Pest Control if you see American cockroaches